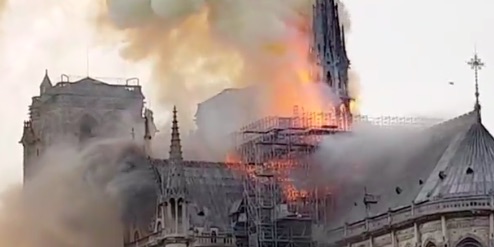 An iconic world treasure is in peril as 850-year-old Notre Dame’s spire collapses and flames race its wooden interior in a devastating inferno. The Cathedral is said to have suffered “colossal damage” in the fire which is raging on into the evening in the French capital. Crowds of aghast Parisiennes and tourists are watching from the bridges and banks of the River Seine as emergency services try desperately to save the medieval building and the priceless works of art at its heart. Devastating footage ea

Catholic Churches Are Being Desecrated Across France—and Officials Don’t Know Why https://t.co/Hiuh00nuEE

Shepard Smith cuts off French Elected Official after he brings up fact that Churches in France have been desecrated in past year.

“Of course you will hear the story of the politically correct which will tell you it is probably an accident” #NotreDame pic.twitter.com/HHdqSrXstg

7 centuries of history going down in flames infront of our eyes #NotreDame pic.twitter.com/oosq9083Hy

The actions included the desecration of altars, the defacing of Christ on the cross, arson attacks and an extreme case of human excrement being spread across the walls.

#NotreDame: ‘The roof has entirely collapsed, there are flames coming out the back of the cathedral as if it was a torch’@charli, Journalist at France 24, at the scene of the fire. pic.twitter.com/2B0IrMiDcL

Sky’s @DominicWaghorn is in Paris where the Notre Dame cathedral is on fire. He says he can see flames “flying 20m into the sky”.

Here’s everything we know about the #NotreDame fire: https://t.co/qkqRQ9rBj4 pic.twitter.com/LGiUVH83KF

Fire at the #NotreDame Cathedral has spread to much of the roof. One of the towers destroyed. Unknown if there are any casualties at this point. pic.twitter.com/7WNRQfYqcG

It’s really sad to see this happen to one of France’s most famous landmarks. It’s 800 years old. It will be such a big loss. The fire looks monstrous but I hope they can still do something about it. #NotreDame pic.twitter.com/GlAGA9xrUE

Enjoy European beauty while it still stands. Long gone are the craftsmen who created such structures. Lord, have mercy.pic.twitter.com/b4WgjjM6wP

Our daughters are being raped.

Violent crime is skyrocketing in Europe.

Officials “HAVE NO IDEA WHY.”

They know exactly why. If they didn’t, they wouldn’t be constantly arresting Europeans for hate speech.

They don’t want you to notice.

This alarming tweet shows the pure Satanic Evil in our world

Ignorant bitch. I’m sure you wouldn’t find it “aesthetically pleasing” if it was a synagogue or mosque that burned down. @gaygadott pic.twitter.com/5iQ2V8Yn9U

This Video Below Will Give Us Some Hope

“From the ashes a fire shall be woken,
A light from the shadows shall spring;
Renewed shall be blade that was broken,
The crownless again shall be king.”