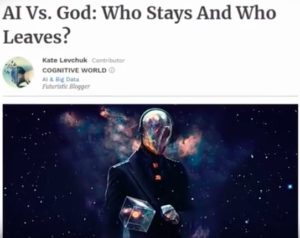 Society is to the point that a millionaire and former Google employee has officially started a church to worship AI as a God in Silicon Valley… and he doesn’t appear to be joking.

Video: Will You Worship the AI God?

– 10,000 years ago, we developed agriculture, which led to cities and warfare.

– 5,000 years ago, we invented the wheel and writing, which lead to the nation state.

We are now on the doorstep of a fourth change brought about by two technologies: AI and robotics. The Fourth Age provides extraordinary background information on how we got to this point, and how—rather than what—we should think about the topics we’ll soon all be facing: machine consciousness, automation, employment, creative computers, radical life extension, artificial life, AI ethics, the future of warfare, superintelligence, and the implications of extreme prosperity.

By asking questions like “Are you a machine?” and “Could a computer feel anything?”, Read More